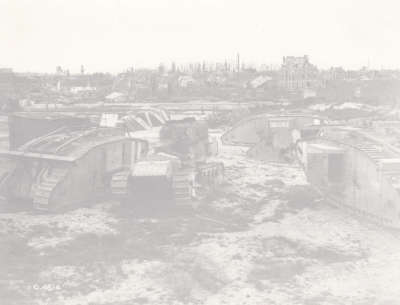 The Second Battle of Villers-Bretonneux (April 24-27, 1918) was the first instance of tank vs. tank battle, between three German A7Vs and three British Mk IVs. Initially the Germans took the town, but were later pushed out by Australian brigades. Shown here are  a number of different tanks, including "baggage" and "supply" tanks, which suggests that these tanks performed slightly different functions, carrying baggage or supplies across heavily shelled ground under shellfire.